My Sexy Saturday: The Blonde Samurai

MY SEXY SATURDAY: Check out the sexy snippets from fabulous authors HERE!! 7 words, 7 sentences or 7 paragraphs.

Week 15 of this phenomenal blogging group. It gets better each week. Be sure to check out the fab authors and their sexy snippets HERE.

We’ve gone to a love hotel and talked about geisha. This week you’ll meet Shintaro, a 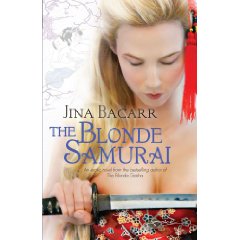 noble samurai lord, a man with the force of an angry god who captures the heart of Lady Carlton, my heroine in The Blonde Samurai. The story takes place in 1873 when Westerners came to Japan to build the railroad. Lady Carlton arrives with her abusive husband, a man who mistreats her and married her for her money and connections. She’s an American heiress, strong-willed, and has a fiery Irish temper.

In this scene, Lady Carlton has arrived at the Imperial Palace to have tea with the Empress when Shintaro races through the great gate leading to the pavilion. The lacquered scabbard of his long sword pokes her bustle when he brushes by her, the aroused, demanding look in his dark, forbidding eyes alerting anyone who gets in his way to beware, that he plies his trade as samurai somewhere between good and evil.

Excerpt from THE BLONDE SAMURAI:

“Who do you think you are?” I yelled at the man, gathering up my skirts and facing him, chin up, shoulders back with all the fire of a martyred saint in me. “Not looking where you’re going, like a chicken hawk in search of his prey.”

He grunted loudly, his forehead beaded with sweat, his hand on his sword, but it remained sheathed, the startled look in his eyes so gripping I had no time to pull back, react. I’ve no doubt in a different time, different place, he would have drawn his sword and I’d have lost my head, since a bared blade claimed the right to draw blood. He yelled words in the native language not found in my guidebook nor did I care. I stared at him openly, my anger turning into something I dared not put into words then but I shall now. Desire, heat. A conscious burn in my pussy as I focused all my energy on him and all my senses—ears, eyes, smell, touch—became inflamed like the bold red of a setting sun as I yearned to show him an independence far beyond what the females he took to his futon exhibited.

I wanted him to touch me, rip my Paris silk trappings from my body with the tip of his blade until I stood naked before him, quivering with need for him…Instead, this giant of a man breathed heavily, his eyes never leaving mine, holding back something I didn’t understand then, a pain he didn’t share with me. Mr. Fawkes [her interpreter] did his best to temper the situation, wiping his forehead with a tissue and panting as he struggled to catch up to me, the long walk up to the gate difficult for him, bowing and calling out in the native tongue when he was but a few feet from this bellowing samurai.

The samurai grunted again then barely nodded, his lack of a low bow no doubt indicating his superior status to me, a woman. I mimicked his gesture, making his eyes spew fire at me then turned my back on him. Not a wise move. I started through the gate, shaken by this encounter with the barbarian warrior yet also thrilled by the majesty of his manly presence. The sheer sexuality of his stance, the intensity of his stare stripped me naked with that stare. Tremors of a delicious nature I’d never experienced ran through me, imagining as I did what he would see, taste, if I bared myself to him and he dared to brush his mouth against my pussy lips, the moist pink folds pouting at the intrusion but wanting more—

I stopped, a sharp pull making me lunge backward and nearly lose my balance. I dropped my parasol and it clattered down on the hard ground behind me. I turned to see this man I would know as Shintaro laughing, his hand firmly grabbing the end of my train. He held on to it so tight I couldn’t move. Now I was his prey firmly caught in his snare. I pulled and pulled but my train wouldn’t budge, though I could hear the silk ripping.

“Release me at once,” I yelled, hands on my hips, then I yelled an Irish expletive that made Mr. Fawkes sputter something in Japanese before I could continue my tirade, fanning himself with his hat and praying under his breath. The samurai laughed, grinning as if he enjoyed watching me helpless, in his power. I couldn’t allow him to get away with his game, though I couldn’t deny a humming in me that made me feel connected to him in a strange way in spite of him making a fool out of me.

Using all my strength, I pulled harder to show him I wouldn’t give in to him, but it was he who let go, as if giving me permission to proceed on my mission. Picking up my parasol, I raced through the black wooden gate with Mr. Fawkes close behind, the sound of the samurai’s raucous laughter following me, taunting me. How dare he. It was in that moment war was declared between us.

The Blonde Samurai is available on Amazon Kindle, Amazon, B&N and e-tailers everywhere

Coming in October 2013 from Cosmo Red-Hot Reads from Harlequin:

NAKED SUSHI is available for pre-order on Amazon!