Sometimes a caring heart can save a life…Suicide Prevention Day

When  Princess Violetta in ROYAL DARE goes to rehab, she finds out the road to sobriety is more than just quitting using drugs. She also discovers it’s teamwork.

Everyone helps everyone else, listening, processing.

But when the princess gets a new job at the rehab facility answering the phones, she uses all of her skills to try to save Tess.

A girl who wants to end it all.

Can Violetta save her? Find out in ROYAL DARE.

Check out my Royals of Monterra Kindle Worlds: ROYAL DARE

rincess Violetta goes off to rehab at the end of Sariah Wilson’s (Royal Date) Kindle Worlds Royals of Monterra, she can’t take her tiara with her.

Princess Violetta is the younger sister of the hero, Prince Nico, in Sariah’s story.

When she goes off to rehab in the States (after being tossed out of a posh London rehab), she doesn’t tell anyone she’s a princess.

Though her British accent and her purse collection (who else but a princess would bring all this stuff to rehab? asked a resident) earn her the nickname of “Princess.”‘

Still, it ain’t easy getting clean…even for a princess.

You can meet see what happened to her afterward in rehab in ROYAL DARE.

I fell in love with the Monterra family, especially Violetta. I call her the “misunderstood princess.” She has everything—looks, money and a title—yet she fell victim to the seductive power of drugs. Why? I wondered. What led her down this path?

I was intrigued to answer that question, but more importantly, I wanted to know what happened to Violetta when she went to rehab. How hard is it for a princess to get clean? And will she find her prince when she does?

I answer this question and more in my Kindle Worlds “The Royals of Monterra” story, ROYAL DARE.

I hope you enjoy it!

What if you fall in love with a royal magician…

In ROYAL MAGIC, Afton and her sister Emma travel to Monterra. It’s a fairy tale kingdom in the modern world. 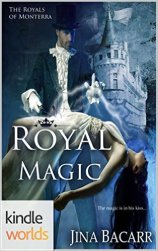 She meets a gorgeous guy who has the look of a man used to getting his hands dirty. Rugged, independent.

When her sister goes missing in ROYAL MAGIC, he’s her only chance of finding her.

Meet this rugged hero in:

The magic is in his kiss…