Art feeds the soul. Makes it sing, makes it cry…makes it whole. 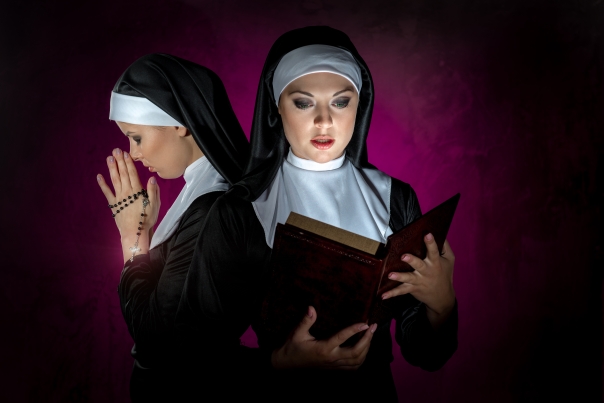 So it’s no wonder the U.S. Army went to such great lengths to recover the precious art stolen by the Nazis as seen in the wonderful new film “Monuments Men” starring George Clooney (opens today, Feb 7th).
In my post, you can read an excerpt from my romance novella where stolen art and a priceless relic bring together an American soldier and a beautiful nun…and they fall in love. It’s Italy, December 1943…I hope you enjoy the excerpt from “A Soldier’s Italian Christmas.”

Captain Mack O’ Casey and Sister Angelina have just heard the faithful caretaker at the monastery, Marcello, has been taken by the Nazis and is being tortured. Sister Angelina believes the Nazi major is punishing him because she’s been stealing food from the monastery for the orphans. She rushes to save him. Mack goes after her, but first he hears a strange tale about a precious relic the major will do anything to get his hands on…

“Marcello is human, Angelina, not a saint.” The captain worked his jaw. “I’ve seen younger men break down when the pain becomes intolerable, their tortured bodies no match for the strongest will.”

“There’s only one way to save him,” she said, sharing his concern. “I will go to the major and confess I’ve been stealing food for the children. Beg him for forgiveness.”

“You forbid it?” Angelina didn’t back down under his surprise order. “Only God can stop me, Captain.”

He reached out to grab her, but a sudden blast of cold wind blew in through the open door, slamming the hard wood against his back and knocking him off balance. Before he could grab her, Angelina raced outside into the coming darkness, her long black veil flying about her like a wild tempest. She didn’t look back.

Mack banged his fist into the wooden door. Damn female. Running off like a spoiled child. Was he supposed to wait here until she returned? What if she didn’t? What if that Nazi had the gall to touch her?

Mack grabbed his helmet and his rifle, fixed the bayonet, and then jammed into the kitchen, waving his weapon in the air. He speared the potato in the sergeant’s hand and tossed it over his head. Sister Benedetto and Sergeant Duffy jumped to their feet, alarmed.

“What is it, Captain?” asked the sergeant, grabbing his rifle. “Nazis?”

“Major von Arx beat Marcello with chains. Sister Angelina went to stop him from killing him,” he rushed the words. His throat tightened, his heart thundering loud in his chest. “If that Nazi major harms her, I’ll—”

Sister Benedetto looked like she was going to faint. Mack left his thought unfinished out of respect for the older nun. She grabbed the rosary beads hanging at her side and made the sign of the cross, mumbling in Italian.

“Are we going after her, Captain?” asked the sergeant, snapping to attention.

“I feared this would happen,” Sister Benedetto said, recovering her composure.

“The major is obsessed with finding the treasure of Monte d’Oro Rose ever since he discovered the private writings of a thirteenth century abate, abbot, among the handwritten manuscripts in the monastery. Beautiful books with illustrations bordered with silver and gold dating back to medieval times. He was convinced Father Tom knew where the treasure was buried and wouldn’t tell him.” The nun clenched her teeth in a rare show of anger. “He wasn’t satisfied with torturing the priest, he ransacked his quarters and confiscated paintings, prayer books, artifacts, everything.”

“How do you know this, Sister?”

“What was in those writings?” Mack wanted to know.

“A strange tale about a sacred cross that protects its wearer from harm in battle. A gift to the Church from a noble crusader grateful to have been spared during the siege of Constantinople. On his deathbed, he gave it to his wife to take to the Vatican in Rome, but she never completed her journey. She sought refuge in the monastery during a storm but she later died. According to the legend, she gave the cross to the abbot for safekeeping, but he wanted the artifact for himself and poisoned her. He hid the relic in a secret place on the hill, but he was later exiled for his black deeds. No one has ever been to find the exact spot where he hid the cross.”

“Does Sister Angelina know about its protective powers?” he asked. Such a thing couldn’t be true, but the young girl’s faith was so strong, she might do something reckless, believing the cross would save her.

“No. Father Tom didn’t share that with anyone but Marcello.” She closed her eyes and prayed. “Thank God the cross of Saint Cecilia lies buried in the bowels of the monastery where the Nazi major can never lay his hands on it.”

Where is the Cross of St. Cecilia? Does Sister Angelina have it?

Check back for Excerpt No. 4 of “A Soldier’s Italian Christmas.”